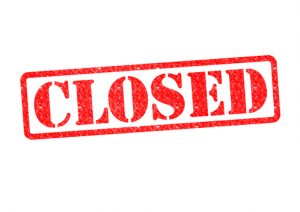 Dozens of employees are out hundreds of dollars after the restaurant they worked at suddenly closed without notice. This happened at both locations of Sarges’ Grill.

The veteran-owned restaurant is aimed to serve veterans, active duty military members, first responders and law enforcement at their locations in Fountain and Colorado Springs.

Over the weekend, customers hoping to eat at Sarges’ were met with locked doors and signs saying the business had closed.

It was a surprise to regulars. Several employees told they didn’t get much notice either.

Michael Yamoaah, a former cook at the restaurant Yamoaah and the former kitchen manager, Nathan Mayfield, told the local news the sudden closure happening so soon before rent and bills are due has left dozens of employees in a bad spot.

We reached out to the owners of Sarges’. An email auto-reply advises us to contact their lawyer. The local news was told the attorney is out of the office until next week.

Several employees we spoke to said working at the restaurant felt like home, but they say how the closure is playing out is hard to believe.

Employees gave an email they say came from the restaurant owners. It appears to have been sent from the same email address that gave the contact information for the owners’ attorney.

The email said in part:

“In the last sixty days, a HUGE percentage of Fort Carson, about 50%+ deployed, which caused our sales to drop nearly 40%, we were fighting hard until this happened, when it is that fast, its over for a company. Due to this extremely fast drop in sales, we were not able to adjust and survive.”

“Basically, you knew you were going out of business, but you kept us working? For what? You could have given us notice and we could have been finding a new job,” Yamoaah said.

The email also said that the owners have filed for bankruptcy.

Typically, employees who aren’t receiving wages from their employers can file a complaint with the Colorado Department of Labor and Employment.

In the case of a bankruptcy, the Department of Labor and Employment recommends for employees to contact the state’s bankruptcy court because employees could have high priority in bankruptcy to get paid back.

To file a wage complaint with the Department of Labor and Employment, you must go with this link https://www.colorado.gov/pacific/cdle/complaint-forms.

To contact for information for the Federal Bankruptcy Court for Colorado, you can go with this link https://www.cob.uscourts.gov/.

The email employees received from the owners was saying:

“We hope in time, you will find a way to remember Sarges’ with a smile, remember all the lives you touched, all the Vets along with 1st Responders you said thank you to, in the way you served them, the smiles you brought, the memories you gave to those who served YOU! We enjoyed the journey, many of you touched our lives in ways you will never understand, we will miss all of you, even those who do not believe it, we will think of you, try to smile even though it ended this way.”