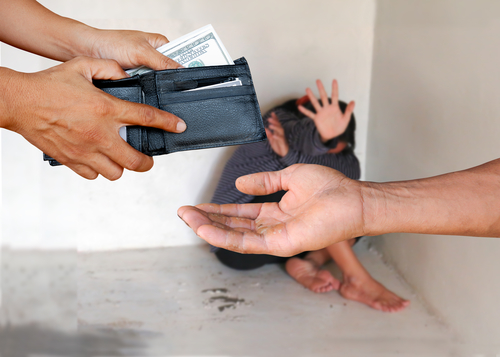 Truckers have long been one of the most important parts of the road, and the industry and Colorado lawmakers want to officially put that perspective to use as the state continues its growing battle against human trafficking.

A proposal next year would do that through legislation. It would require all new commercial driver’s license candidates in the state to go through a course. This course will teach them how to identify the tell-tale signs of trafficking. And what to do if they spot them.

It is a model that follows what several other states are doing. The industry says it has shown success — and that it is happy to support.

“It was really something that a lot of our companies and drivers have embraced,” president of the Colorado Motor Carriers Association, Greg Fulton, said, an industry group. “It’s like having an army of additional eyes and ears out there to be monitoring this.”

Truckers May Learn From Their Employers

Some trucking companies have already been voluntarily teaching their drivers how to identify signs of labor or sex trafficking when out on the road or at motels, as well as the means to get in touch with authorities and report what they have seen.

But this formal process, advocates say, would ensure that nearly all commercial drivers in the state would have that skill set as they transport goods across Colorado’s maze of highways.

Since its start in 2009, Truckers Against Trafficking says there have been nearly 2,000 trucker calls to a national human-trafficking hotline, shedding light on about 545 likely cases of human trafficking involving more than 1,000 victims. The advocacy group has trained nearly a half-million people.

The Colorado legislation comes as hospitality workers from hotels to airlines are also learning to identify signs of human trafficking.

“It’s great that we’re going to be having education around this issue, with more transportation sectors within the state,” said Amanda Finger, who leads a Denver-based nonprofit, the Laboratory to Combat Human Trafficking. “We know that transportation across state lines is often involved in sex and labor trafficking.”

That makes it key to have as many people as possible looking out for victims. However, they also need to know what to look for.

“It’s my understanding that most of the sex-trafficking cases and labor-trafficking cases are identified by members of the public,” said state Rep. Dominique Jackson, D-Aurora, who is sponsoring the legislation. “And those members of the public include truckers. Truckers tend to be at places where people come in and out of — motels, truck stops and gas stations. They see a lot of things.”

Jackson and others say they don’t anticipate that the human-trafficking training will add any cost to truckers going through a commercial driver’s license course. It takes just about 30 minutes.

After the 2018 legislative session begins January 10, people expect the bill to reach the council floor early next year.

“It has very strong bipartisan support both in the House and the Senate,” Jackson said. “We’re going to get this going, and get this going quickly.”