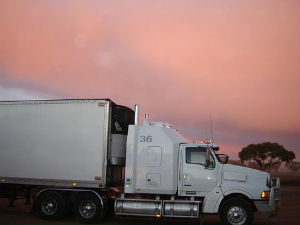 It’s no secret there’s a shortage of truck drivers in America. And the state of Colorado is feeling the crunch just like everybody else. It’s a scary problem, especially when considering most of the goods in our country are transported via trucks.

In Colorado, the number of drivers has consistently dropped across the state. In particular, it affects the long haul sector. This is according to the Colorado Department of Labor and Employment. Despite the drop in drivers, wages for truck driving jobs have increased year by year. See, companies are bumping pay up to incentivize new drivers into the field. While the increase helps drivers, it conversely leads to inflated prices of consumer goods.

Ryan Gedney, a economist at the Colorado Department of Labor and Employment, says “Businesses really have to be creative to entice people who really haven’t been in trucking before.”

The problem with the truck driving field is that it requires a lot of hours and work. Plus, people don’t see it as a sexy profession. Consequently, the average person just isn’t interested. Officials maintain that trucking is a hard life and that very few people want to drive long haul anymore.

Immigrants and Refugees Filling the Void

However, there are some willing to tackle the long hours and grueling driving schedules. It’s immigrants and refugees. Mike Euglow, CEO and owner of Commercial Vehicle Training Center, says his classes are full of East African and Afghan immigrants. For some of these students, trucking gives them instant purpose and enables them to travel their new home – and it’s all paid for.

Euglow realizes that part of the calling card for his school is its emphasis on inclusion. It’s drawing more and more students, immigrants and otherwise. Plus, he’s hired immigrant teachers to provide a bridge to similar students. It’s working, his school is overflowing with new wannabe drivers every day.

Walkability in Colorado Springs: AARP IS Taking Steps To Improve The Situation