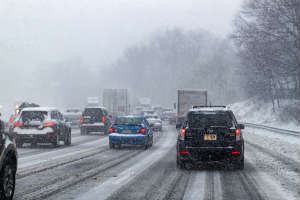 COLORADO SPRINGS – The Colorado Springs blizzards hit the community hard earlier this week – and surprised almost everyone. Many were unprepared for the blizzard that brought extremely high winds along with the snow. Some say that the storm did not seem like much of a problem at first, but suddenly, the storm seemed to come out of nowhere. And, due to a crash on Woodmen Road, hundreds of people became stranded in the 100 mile-per-hour winds.

Many thought that they could beat the storm, and that was why they were out on the roads. Just before 10 in the morning, the first big winds measured up to over 50 miles per hour by the Colorado Springs Airport. Then, what started as raindrops turned to large snowflakes.

Weather forecasters referred to the storm as a “bomb cyclone.” Essentially, this was a winter storm but with a hurricane effect. The Barometric pressure went down fifty points in the Pikes Region while the storm went through.

Apparently, people were surprised even though many warnings went out about the storm. According to Sheriff’s Office Lt. Bil Huffor, the deputies in the department spent more than a full day warning drivers about the storm. They used social media, radio broadcasts, and other forms of communication to get the information out. However, people simply didn’t believe it.

Like many national disasters, the severity tends to surprise people. Therefore, people remained unprepared for the realities of the storm. As a result, emergency personnel, along with good Samaritans, had to rescue multiple people from their snow-trapped cars. In fact, some people were stuck for twelve hours in the Colorado Springs blizzards.