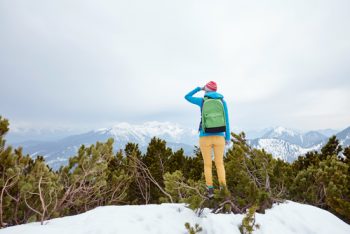 Julia Archibald Holmes became the first woman to climb to the top of Pikes Peak one hundred-sixty year ago.

She challenged those, who believed it was inappropriate for a woman to attempt a summit.

She had a controversial, unusual way of wearing ankle-length trousers below a skirt. It became a source of inspiration for women, especially for locals.

In honor of the 160th anniversary of Holmes’ climb, four local women ascended Pikes Peak in bloomers.  In 1850 it was very unusual for a woman to hike or to be a mountaineer, said Elizabeth Barber, the co-organizer of the hike.

She thought if Julia could do it, why couldn’t she? And she was right!

Before 2008 Barber had never climbed a fourteener.  That year, Barber helped organize events across the city for the 150th anniversary.

She got so inspired by Holmes’ feat that she decided to pursue mountaineering.

Holmes became a great evidence of the influence of women from the past on women of the present. She was from a big family of eight children.

Holmes fell in love with one of Brown’s lieutenants named James H. Holmes.

In 1858 the couple started their expedition to Pikes Peak. Barber said the expedition was an escape from the boring, inactive camp life.

Let’s agree that even today we can escape boredom by climbing mountains.

Holmes was invited to the Colorado Women’s Hall of Fame in 2014.  The 160th anniversary of the ascent is a key to understand the changes in outdoor recreation for women and the potential for further changes.

It’s enough to look back for 10 years and we will see that women got accepted into the outdoor activities as time goes, but a fight is still there for equality.

‘’No need to sacrifice your femininity when you do something rugged. We are wearing dresses to express our femininity in the outdoors”, Barber said.

Let’s hope a lot of women will join it and will show that staying feminine and hiking can go together!