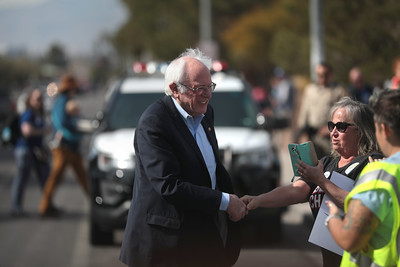 In a race that’s seen a fair amount of fluctuation, the consistency of recent polling suggests Bernie Sanders has locked his frontrunner status. Going into Super Tuesday next week, analysts believe Sanders looks favorable. A plurality of delegates seems all but certain.

However, obtaining the most delegates fails to guarantee the nomination. In July’s Democratic convention, the first-round vote only includes committed delegates from the states’ primaries. If no candidate receives an outright majority, totalling 1,991 delegates, a second round determines the ultimate victor.

Concerns over such a scenario worry supporters of Bernie Sanders. A contested convention allows superdelegates, party members free to select a candidate without the will of the voters, to participate in the process.

Given Bernie’s outsider status within the party, many suggest these superdelegates will vote against him. While all the other candidates argue in favor of the permitting superdelegates to choose for themselves, critics suggest a contested convention allows party loyalists the opportunity to undermine the will of the people.

Some point to Sanders’s comments from the 2016 primary, in which he trailed former Secretary of State Hillary Clinton in both delegates and popular vote. During that time, he suggested superdelegates might tip in his favor.

The differentiating factor involves media coverage. During the 2016 race, news outlets essentially allotted the superdelegates to Clinton despite the ongoing primaries. It left voters with the impression of a comfortable lead over Sanders.

In the wake of the 2016 Democratic primary, many progressive felt slighted by a Democratic Party intent on ensuring Clinton’s victory.

Now, superdelegates remain undecided, so far as the public is concerned. Their involvement during a contested convention holds the potential to deliver the nomination to a candidate with a smaller slice of the popular vote.

Though, Sanders still stands a chance of obtaining a majority, edging out the possibility of a brokered convention. His polling in Colorado mirrors his numbers in delegate-rich states like California and Texas, though the later shows a tighter race.